Can we experience snow falling in Saudi Arabia? 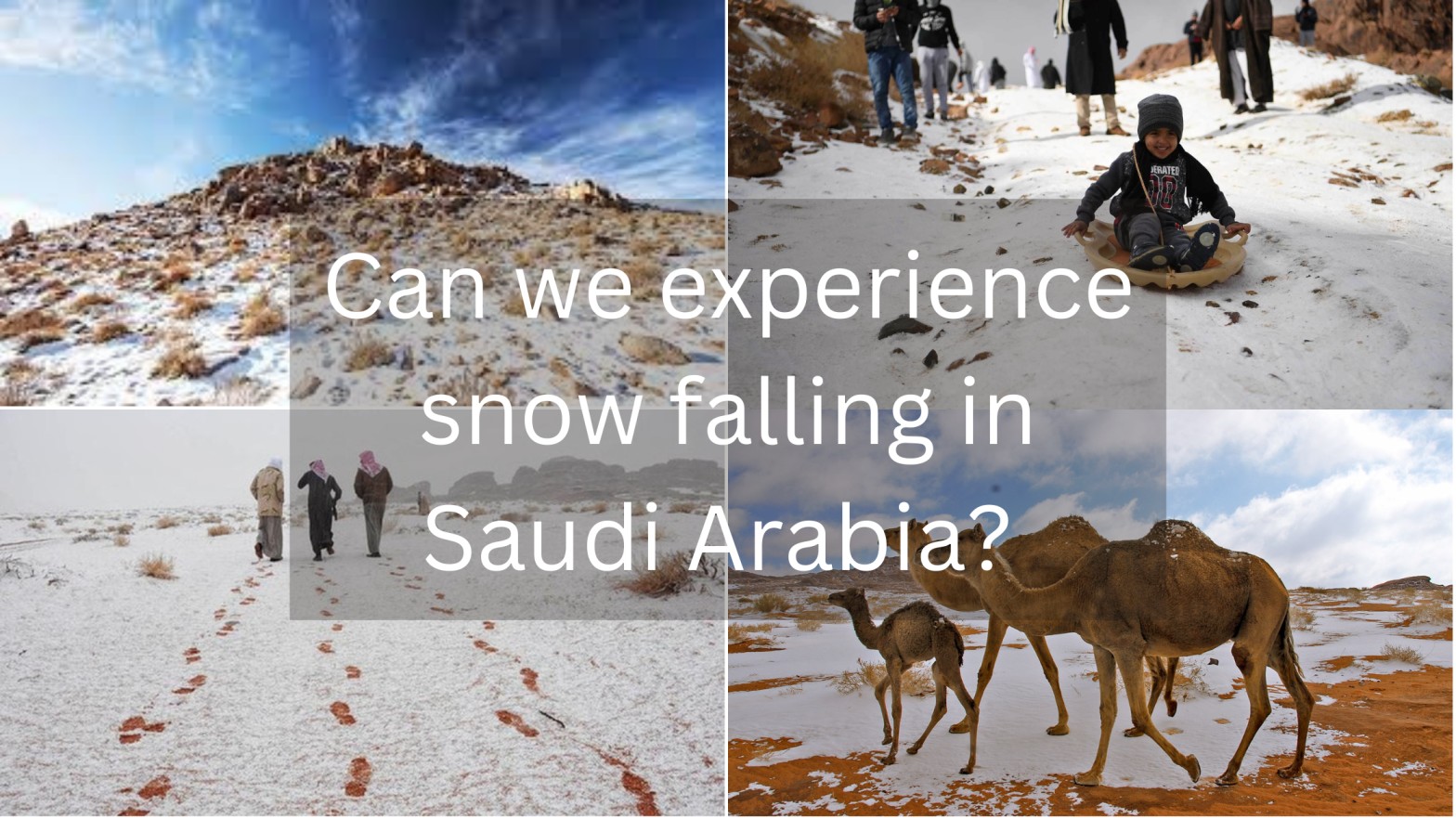 As we know, the Middle East is the very hottest region in all over the world. It is very famous for its dry weather and scorching sunshine during summer. Saudi Arabia is a big part of this region, and it is also well known for its dry and hot weather in summer. However, some parts of this country are very cold in winter and also snow falling occurs in these regions. So, in this context, read this topic to know and explore these regions, “Can we experience snow falling in Saudi Arabia?” This article will provide you with authentic information about the above topic.

The two biggest and holiest mosques in Islam are located in Saudi Arabia, one of the last remaining monarchs.

Due to its geography, Saudi Arabia has a lot of snow, which helps the country’s tourism industry during the winter. The opportunity to ride Arabian camels and explore Saudi Arabia’s stunning landscapes covered in fresh white snow is made possible by the country’s snowfall. During the winter, hiking and snow sledging are additional opportunities. While travelling on the mountainous roads in Saudi Arabia, in winter, tourists can also enjoy the snowfall. Therefore, travellers can enjoy a wonderful and unforgettable experience in Saudi Arabia’s snowfall areas.

Some of the best areas for travellers to experience the best of winter tourism are located in Saudi Arabia. Even though snow is commonly thought of as rare in this kingdom, some cities frequently change into winter wonderlands. The places in Saudi Arabia to experience Snowfall are as follows:

On the southwest side of the country, in the beautiful Asir Mountains, is where Abha is based. It serves as the region of Asir’s capital. Even though snowfall in Abha is not common, it is always a sight to witness. Hilltop fortifications and well-known tourist destinations like Shadda Palace, the Al Tahy restaurant, the Abha Great Mosque, the Abha Palace Hotel, and Lake Sadd can be found in Abha.

The average maximum temperature during the winter is 21 °C, while the average low is 12 °C.

Nejanj festival is the most attractive winter event in Abha to celebrate Saudi Arabia’s traditional attire and cuisine.

The city of Turaif, which is in the Northern Borders Province, lies near Jordan. Some of the lowest temperatures ever recorded in the Arabic region were in Turaif. In the winter, many visitors visit the city to enjoy in the natural beauty of the area. Visitors can experience winter tourism and activities in Turaif by visiting a variety of historical heritage villages, castles, and snow grounds.

The ideal time to tour forts and historic villages in winter. When covered in snow, they make a beautiful sight.

The scenic city of Tabuk is situated in the northwest of the Kingdom, making it considerably closer to the Saudi Arabian and Jordanian border. With its many historical forts, castles, and archaeological sites, it is a must-visit winter destination. Tabuk has a little snowfall every year in December because of its proximity to the Jabal-al-Lawz mountain range. Visitors flock to the city to see these snow-covered peaks, which provide a magnificent view.

Read Also: How do I prepare for Ihram?

Another amazing location for tourists to visit in Saudi Arabia to view the Snowfall is Rafha. It is situated close to the Saudi-Iraqi border. The city experiences scorching heat in the summer while changing into a beautiful location in the winter. In the month of December, Rafha is famous for experiencing a large amount of snowfall. There are open fields in the city that frequently get covered with snow and are used for winter tourism.

The average maximum temperature is approximately 18.4 °C, and the average winter minimum is 4 °C.

The city offers a number of open fields where people can play in heavy snowfall, such as snowball fights.

The city of Shaqra is situated to the northwest of Riyadh. The tourists have several places to enjoy snowfall in a city setting, attracting visitors from far and wide. It offers a beautiful blend of both new and old buildings.

During the winter, in Shaqra, 16 °C and 3 °C are the averages for the highest and lowest temperatures.

Although it is not the hub for outdoor adventures, having a causal stroll through the city roads that are covered in beautiful snow is sure to make you feel better. Shaqra Dates Festival is a beautiful event in Shaqra.

The city of Arar, which is well-known for its fertile pasturelands, is one of the best places in Saudi Arabia to see snowfall. Snowfall often occurs in Arar every two to three years. Even though it rarely falls below zero, the sand occasionally develops a light layer of snow during the winter.

The average high and low temperatures in the city are 16 °C and 3 °C, respectively.

Winter is a great season to travel the limestone plains and do city tours. The Saudi National Day, which is celebrated just before the onset of winter, is a favourite event for the residents of Arar.

How often does it snow in Saudi Arabia?

Does it snowfall in the desert of Saudi Arabia?

Snow is not usually associated with the desert region of Saudi Arabia, however, on two occasions in 2016 and on the first day in 2022, the region snowed.

Does it snowfall in Makkah?

Makkah doesn’t typically get snow, but in 2016, there was a rare occasion when it did. The city does, however, have a scorching, arid environment, with blistering summer days and little to no rain.

Things to do in Saudi Arabia during winter

A short discussion about the things to do in Saudi Arabia during winter is below:

Tabuk, Saudi Arabia, has a number of mountain summits with great hiking opportunities and panoramic views.

Although camping may seem like a summer activity, it is actually a winter hobby in Saudi Arabia. Inside a typical Arabian tent, you may have an Arabian night under the stars.

What could be better than a ride across Saudi Arabia’s enchanted winter landscape? Either a camel ride or a car ride is an option; it goes without saying that camel rides are superior.

Locals travel up north in the winter to sledge through the strange weather condition. So why not share in the thrill of sliding down Saudi Arabia’s snowy slopes with the locals?

We know that Saudi Arabia is very famous for its arid and hot weather. But, there are many parts of this country that have a lot of snow falling during the winter. Abha, Tabuk, Arar, and Rafha are included in these snowy regions of Saudi Arabia.

Travellers can enjoy several things, as long as snow falls during a visit to Saudi Arabia, by booking their December Umrah Packages because December and January are the coldest months in Saudi Arabia.

In Orlando Wedding Venues and Hotels

How to Book a Burj Khalifa Tour